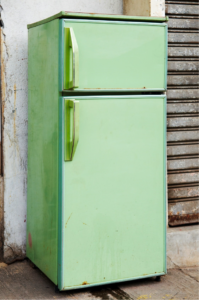 This particular property management myth goes both ways. On one extreme, is the optimist who insists that anything can be repaired, including the avocado-colored refrigerator they bought for the unit that never gave them any problems. On the other end of the spectrum, is the argument that it’s always going to be cheaper to replace than to repair; disposable appliances are the new norm because “they just don’t make them like they used to.”

Neither extreme is accurate, and as such, deciding between repairing or replacing a broken appliance depends on a number of factors. Before you fix in a frenzy OR rush to replace, you should consider the age and condition of the appliance or structure, the expected lifetime, previous fixes, and safety concerns (not to mention evaluating what is specifically wrong, if possible). The general rule is if an appliance is older than half of its expected lifespan, and the cost of the repair is over half the cost of replacing (note, not necessarily half the original cost – there is a difference), then you should replace rather than repair.

Another reason to consider repairing instead of replacing is for tax purposes. The costs of rental property repairs are deductible that year. On the other hand, the cost of an “improvement” – which most replacements qualify as, will have to be depreciated over years (the property’s life expectancy).

Again, as noted already, it is also very important to consider the impact, implications, and impression for your tenants. Consider the repercussions of repairing – losing a good tenant because the repair took too long, took multiple repair calls, and broke again a month later. An ounce of prevention is worth a pound of cure… but a pound of cure trumps seventeen individual ounces of repair.

We are pledged to the letter and spirit of U.S. policy for the achievement of equal housing opportunity throughout the Nation. See Equal Housing Opportunity Statement for more information.